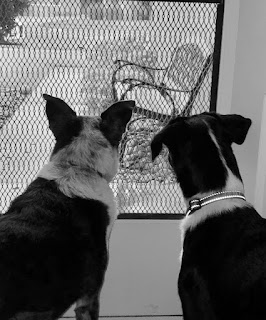 I live in a semi-arid region of SoCal. It doesn’t usually rain, but when it does, my dogs don’t like going out in it. Instead, I play inside games with them to burn off enough excess energy so I can have a somewhat productive writing session.

I have two pups: a sedate and well-trained senior female, and a young adult male who’s full of energy. He’s supposed to be in training under the female as a watchdog, but he’s learned that people who visit fall in love with him, so he welcomes all comers.

My ranch-style house makes a good playground. The thirty-five-foot straight stretch from my tea mug in the kitchen to the end of the hall could be the world’s narrowest bowling alley, but I use it to exercise the dogs. The dogs chase the tennis ball down the hall, catch balls and dog frisbees, and jump through a hula hoop. We also practice tricks and off-leash obedience. Finally, the dogs get to eat breakfast, and I can write for a few undisturbed minutes while they relax at my feet.