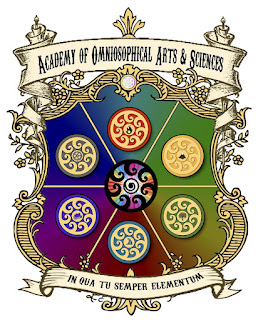 My publisher, Founder and Chairwoman of the Board of Whimsicalidocious Arts, the nonprofit overseen by the Academy of Omniosophical Arts & Sciences, should be catwalking Cloud Nine. In July, two of her decade-long dreams finally came to fruition.

The Academy of Omniosophical Arts & Sciences (aka, Omni, the Ocademy – “where you’re always in your element”) "offers a whimsical interactive approach to education, entertainment, and enrichment.”

Early in the month, the first annual pirate-themed Shared Treasure Hunt (STH) launched at a beachside park in SoCal. “Shared Treasure Hunt is the Academy of Omniosophical Arts & Sciences' kids-helping-kids program designed to aid homeless and impoverished children while teaching more fortunate youths the value and joy of philanthropy.”

Later in the month, she hosted a Patron Appreciation ParTea to launch and celebrate the Academy of Omniosophical Arts & Sciences with element-based dining tables, during which a few participants recreated a tea scene from her Peyton Drake fantasy series with a skit.

Through Omni’s social group, the Tea Travellers Societea, I have attended numerous themed events and traveled the West Coast from San Diego to Vancouver Island, Canada.

I first met my publisher at a mystery-themed tea event at Pamela’s Tea Room. We meet there often for tea, and last month I asked how she describes her work. She said she runs a “creativity academy with an emphasis on philanthropy.” That sums it up nicely.

She doesn’t have time for the catwalk, but Cloud Nine has definitely become her address.

In my last post, I’d pruned the deadwood from a scene’s rough draft.

Next, I infused the character’s point-of-view into the scene to add interest and draw in the reader.

Lynn groaned and reached out to slap off the alarm but hit an empty tabletop. She opened her eyes, and an involuntary smile lit her face. The B-and-B. The spa. She turned off the alarm and jumped out of bed.

She vocalized a triumphant version of Beethoven’s ‘Ode to Joy’ as she showered. After drying her hair, she browsed her wardrobe choices. The spa package included manicures and pedicures, facials, and massages.

She selected a calf-length sundress suitable for the warm summer day. She laid the dress on the bed and fanned its wide skirt. Large red flowers popped from white fabric. Small green leaves accented the pattern.

Lynn reached into the closet for sandals but, instead, pulled out a short, hot-pink dress. She held it against herself and admired the reflection in the mirror. The color set off her complexion and golden hair, and the style complimented the curves of her figure.

The doorknob rattled, and Roni walked into the room. “Hey, no fair being sexier than the bride.”

Lynn chuckled. “Scott can’t keep his eyes off me when I wear this, but I’ll wear a longer dress for the pedicure. Can’t be modest in a short one.”

Roni grinned as she smoothed her blonde hair into place. “Becca and Delaney are downstairs drinking coffee. Breakfast will be served in ten minutes. See you there.”

Lynn hummed a reprise of ‘Ode to Joy’ as she dressed. The full skirt of the red-and-white floral sundress billowed as she twirled in front of the mirror. Happy with her choice, she opened the door and followed the aroma of freshly baked cinnamon rolls to join the other bachelorettes for breakfast.