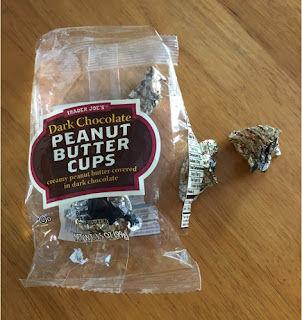 Sometimes I investigate an incident (crime) at home (scene of the crime) through the eyes of my police detective character (Scott McGregor).

Collecting evidence is part of a policeman’s job. Trash at the scene of a crime may have been discarded by the perpetrator. The trash is sent to the lab where fingerprints and trace evidence, such as hair and fibers, are collected and recorded.

Once the crime scene has been processed, the detective sifts through the evidence looking for leads. Sometimes the collected evidence doesn’t relate to the crime. Trash may have been discarded before or after the crime by persons other than the perpetrator. Some leads may be ‘red herrings,’ evidence that is misleading or distracting.

This discarded candy packaging was found in my locked office. Initially, it appeared to be damning evidence that I had violated my diet and ate the candy. Upon closer inspection, though, a white Border collie hair was discovered resting on the lower edge near the left corner. Is this a red herring, or evidence that the dog ate my candy? 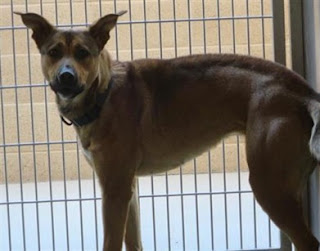 No one wants to read about flat, cardboard characters. The antagonist in my current work-in-progress suffered from two-dimensionalism with only occasion bulges of 3D. I needed to round out the character.

Inspiration for character development came from an unexpected source. One of my secret vices is browsing the lost and found dog pictures on the local animal shelter website. I already have a dog, and I’m not getting another, but I enjoy looking.

One German shepherd-type dog was so skinny, his backbone and ribs showed through his skin. I decided he could be a lost dog the antagonist befriends. I might have the antagonist see the dog from a distance and wonder at first if the animal is a coyote.