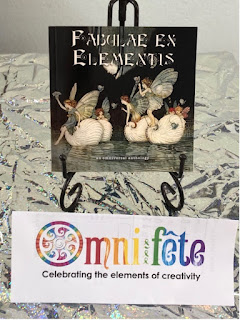 The first annual Omnifete exploded onto the creativity scene Sunday, November 13. The physical location of the arts fair was Southern California, but artisans from the around the country displayed their wares.

The afternoon arts fair (hosted by Whimsicalidocious Arts, the philanthropy arm of the Omni Ocademy) emphasized literacy advocacy and cultural connectivity. From books to baking to painting to hand crafting to jewelry to massage therapy and music, I browsed, enjoyed, tasted, and purchased.

I admit I spent more than I brought in selling my books, but no complaints here!

One of the highlights of the day was the talented group of SoCal acoustic musicians pickin’ bluegrass. I look forward to hearing them again.

This morning while I was online, I was literally threatened. Or would that be literarily?

And just like that, the subplot became more interesting.

The main character will receive an anonymous threatening note. But she leaves fingerprints all over it when she tries to correct the punctuation, causing the police to think she sent it to herself.

I know how the main character felt – about the punctuation.

I came home from work one day decades ago, and found an anonymous note taped to my front gate. I had the urge to get a red pen and mark up all the spelling, punctuation, and grammar errors. I wanted to write ‘Please correct and re-submit’ on the top and tape it back on my gate. I didn’t though.

A week later, a neighbor knocked on my door to complain about my barking dog. As she spoke, my dog trotted up and sat quietly beside me. All the while, some other neighbor’s dog continued to bark. Her apology was truly one of the little joys in life.