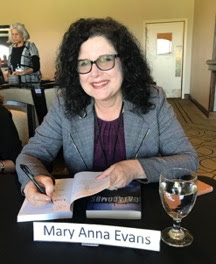 The conference was educational for both readers and writers, and the 100+ attendees were able to meet and talk to the authors. The all-day event also included book sales (which could be personally inscribed), gift basket raffles, and a delicious lunch.

I thought this year’s conference was even better than last year’s, but that may be because I’d read more of the authors’ books. Or perhaps because I had the honor of driving one of my favorite authors, Mary Anna Evans, creator of the Faye Longchamp archaeological mysteries, for the weekend.

November is the flagship National Novel Writing Month during which the traditional goal is to write a 50,000-word draft for a new novel. My project, though, is a work in progress I began November 2017. My goal (again) is to finish revisions on the second Detective Scott McGregor mystery, Murder Goes on Vacation.

Yesterday afternoon I worked on defining and fleshing out Scott’s internal conflict in several scenes while struggling not to cross the line between flawed character and weak character. I thought about character development again last night before I drifted off to sleep.

This morning I wasn’t surprised to find Scott in bed with me when I woke. “It’s early, and I want to sleep longer,” I mumbled.

“No, wake up. I have an idea,” the Scott character in my mind said.

“Stop crowding me. Move over and be quiet.”

Knowing he wouldn’t give up, I sat up, grabbed the pen and paper from my bedside table, and jotted down the inspiration before it evaporated.