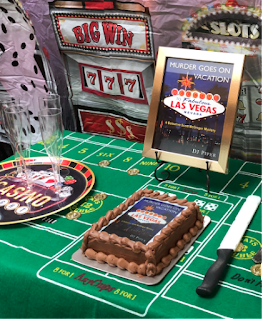 Detective Scott McGregor’s second mystery, Murder Goes on Vacation, was set in Las Vegas, so what better way to celebrate the book’s publication than having a casino-themed party?

The event was held at the same location as the first McGregor book launch, Pamela’s Tea Room in Southern California, which was renamed “Pamela’s Las Vegas Casino” for the party. A fake business license made the gambling site legit for the day.

As always, the food was incredible. Broccoli-cheddar quiche, sausage rolls, turkey-cranberry-cream cheese sandwiches, salad, scones, and lots of tea. Dessert was a cake decorated with an icing picture of the book cover.